Derry SFC to revert to knockout? 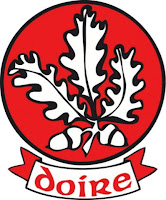 After the findings of the GRC (Games Review Committee) it is understood that one of the proposals for next season will see the Derry SFC revert to straight knock out.

Another important point is clubs will only lose their county players for 4 games, unless Derry progress to the All Ireland semi finals, with all their players available for two league games before the championship.

Summary of proposals are listed below.

6) Team finishing top of each league wins the league and gains promotion.

7) Promotion and relegation to be one up and one down in each league with no playoffs.

8) Alternative calendars to be drawn up to reflect the possible progress of Derry Senior county teams in their relevant competitions.

9) Fixtures to remain on dates and times as sent out before season begins.

10) All club weddings and major function dates to be sent to CCC (date to be confirmed by CCC). These will then be factored into the games calendar prior to release.