TRIBESMEN NEXT IN DERRY’S SIGHTS 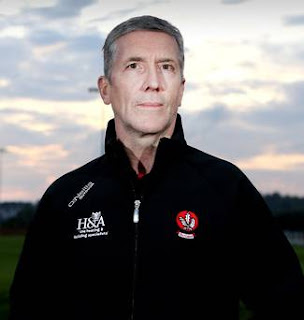 With seven games in a six-week spell, Derry’s season took off at breakneck speed. Then came the lull. It’s seems like an eternity since all those blocks in Breffni Park as Derry clung on and met their target of two successive league wins.

This Sunday Damian Barton and his team will await the visit of Galway to Celtic Park (2pm) as the next stage of the season kicks into gear.

It wasn’t under his watch, but Barton remembers the previous meeting between the sides on that wet Saturday last July when Derry made their championship exit in Salthill.

"Galway are a big team as well and obviously put Derry out of the championship last year. We have them at home but it doesn't matter who the opposition is, we look at ourselves.”

With the inclement weather and unplayable pitches, Derry have based their preparations at Dungiven’s Garvagh Road pitch for the past few weeks.

With the Eoghan Rua contingent back in the fold, the trio of Brendan Rogers, Gerard O’Kane and Dermot McBride closer to a return to action, the competition for places this Sunday will give the management some welcome headaches.

This Sunday’s game and the trip to Omagh next Saturday will have a huge bearing in what direction Derry’s promotion challenge takes.  Barton still hasn’t forgotten how tough this league actually is.

"I mean six points and you're safe in this league perhaps. But this is one hell of a league and there is an awful lot of football," outlined the Derry boss in the aftermath of the Cavan result.

Looking ahead, Galway stormed to a convincing win in O’Moore Park against Laois but lost out at home to Tyrone with a fortunate Tiernan McCann goal.

Annaghdown’s Damien Comer has scored 3-2 in Galway’s first two games and alongside Adrian Varley, their other goalscorer against Laois, the pair will provide Derry with plenty of food for thought.

Under the leadership of former All-Ireland winner and midfielder Kevin Walsh, the Tribesmen will travel with plenty of positivity.   Derry’s James Kielt feels Galway will be looking to build on their underage promise.

“I’m sure Kevin Walsh will be looking for promotion because the sooner they get into division one the better.  They will be looking to push on after winning two U21 titles recently.”
We caught up with the Kilrea man last week.  He is back hungrier than ever this season.

The dentist based in Limavady is more content now with the exam pressure all behind him.
“I’ve no pressure of exams to do, that was always tough because exam time was in around championship time.”

The 2007 minor captain was brought into the senior setup early in his career and between all the teams he was involved in, it can be easy to lose your enthusiasm.

“I had a busy spell with different teams in school, university and the club seniors. So when it comes to national league it’s just more games.”   The horizon has now changed and Kielt was looking forward to the new season.

“Now [with less teams] you actually look forward to games more.  We were beat by Coleraine last year in the championship and I’ve had no games from then until January.  So even the McKenna Cup, I’ve looked forward to it this year.”

Kielt certainly doesn’t miss the commute to and from Belfast for training.  “Now after work you have no pressure, you go home and put your feet up for half an hour.”

“The travel [from Belfast] was a killer.  Now I work in Limavady, so you get to Owenbeg in good time, go to the gym for a stretch or do a bit of weights.  You’re a bit fresher for training.”
Going into this weekend Kielt can also see the benefit of the two wins already in the bag and
Derry can start looking forward.

“The first two games are always important and with two wins, it gives you the cushion that you can push on and focus on the games ahead.”

“The games come thick and fast in March. I think we have one week off but every player wants that.  It’s something to look forward to and once that run of games is over you’re getting near championship time then.”

At 27 Kielt is one of the older players on the panel now.  He makes a note of it but age is only a number but it is indicative of how the game has changed.

“I looked at the Fermanagh game and thought, ‘Jeez I’m the oldest in the forward line’.  I looked at the midfield and said ‘I’m still the oldest’.  I kept going back and only Ciaran Mullan and Postie [Thomas Mallon] were older than me.”

With Galway being traditionally one of the few pure footballing teams still left, this weekend’s game could be a brief respite from the packed defences.  As a forward we asked Kielt what it’s like to play in the modern game.

“It’s more annoying because you sort of have to play boys back.  If you don’t and the way the game is, teams will tear you apart.  No matter how good your defence is one on one, a good county team is going to do damage.”

Having played under Barton at club level, Kielt is well versed on the Derry manager’s vision of how to play the game.  That attacking dimension he is bringing to the table.

“You are trying to get as many men forward too.  The more men you bomb forward the more chance you have of scoring and the game is about scoring more than the opposition.”

Derry cannot control how the opposition setup and it can suffocate long range scorers like Kielt.  These are the type of players opposition managers are out to nullify.

“It can be frustrating standing there in the half forward line, two defenders on one side of you and another defender covering space on the other side and you’re left with nowhere to go.”

Kielt is a sport fanatic and fan of the traditional game and when you can kick the ball as far as he can why would you enjoy the short passing game.

“I’d be more inclined to try and play traditional, the quicker you get the ball in, the better chance of getting two on two, and all you need is one break and you have a goal chance.”

“You always try to play to your strengths with any team and when Cailean [O’Boyle], Sucky [Ryan Bell] and Emmett [McGuckin] are in there, which has been more often than not, our strength is in the air.”

The key word in this Derry setup at the minute is adaptability.  All the players mention it.  Knowing when kick and when to keep possession for the darting run off the shoulder.  Kielt recognises the need for using the runners.

“I suppose you have players that are good runners on the team, who can run through with a bit of pace, the likes of Gareth [McKinless], Ciaran McFaul and Ciaran Mullan.  It’s good to mix it up.  If you play long ball in all the time it’ll be easy to read.”

When Galway come to town on Sunday, Derry fans will get a chance to see their team back in action after the break.

The chance of seeing a more open game will be appealing but more importantly securing another two league points will be the main priority.

Next up is the trip to Omagh and that game will take on a life of it’s own.

LAST MEETING – Saturday 18th July 2015 (Salthill)
All-Ireland Qualifiers - Galway 1-11 Derry 0-8
Playing against a strong breeze, Derry inspired by a top drawer performance from Danny Heavron trailed just 0-8 to 0-5 at half time.  With the strength of the wind Derry were well placed to win the game.

The Oakleafers reduced the deficit to a single point early in the second half but that was as good as it got.

Gary Sice was flawless from frees and a Danny Cummins goal sealed Derry’s fate and put the Tribesmen through to the next round of the qualifiers.

Posted by Michael McMullan at 21:00
Email ThisBlogThis!Share to TwitterShare to FacebookShare to Pinterest