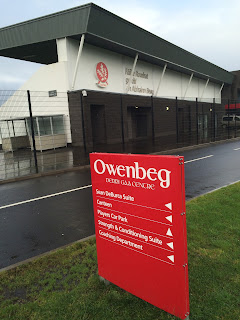 Antrim won't be naming their starting lineup until just before throw in.

Newcomers Karl McKaigue and Joe Morgan come into the Derry defence with Magherafelt's Shane Heavron listed in attack after some impressive performances during the summer.

With Fermanagh visiting Owenbeg for the beginning of the NFL on 31st January, the next three weeks will give Derry a chance to get a look at players and begin their preparations for  the visit of Tyrone to Celtic Park on 22nd May in the Ulster Championship.

Meanwhile Derry hurlers will play Donegal on Saturday (1.30 The Dub, Belfast) in the Conor McGurk Tournament.