Derry aiming to bounce back 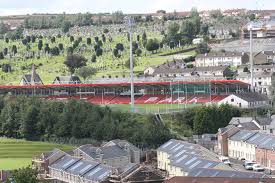 Derry have made four changes for the visit of Fermanagh on Sunday in Celtic Park (2.15).

As expected Conor McAtamney starts in place of Brendan Rogers at midfield after an impressive showing against Tyrone.

With Fermanagh's star player Eoin Donnelly stationed at midfield this sector is going to be vital.

The other injury victim Enda Lynn is replaced by Conor Kearns at wing forward.

The other two changes are somewhat tactical.  Danny Heavron is listed at corner forward with his brother Shane the one losing out.

The older Heavron [Danny] is noted as a wing back or sweeper, so it looks like Derry are going to mimic Fermanagh's setup and hit them on the break.  Che Cullen could then be left free but with Derry's goal and penalty threat it is unlikely he will push up on Danny Heavron.

The other change sees Neil Forester come in for Mary Craig with Chrissy McKaigue lining out at full back where he will lock horns with Erne talisman Sean Quigley.

Danny Heavron will provide the protection in front of McKaigue with Forester, McKinless and McFaul all given licence to counter attack - hopefully not all the same time as McKinless will have to keep and eye on Ruairi Corrigan.

In the other matchup either Ciaran Mullan or Karl McKaigue will be tasked with picking up Tomas Corrigan, who now plays his club football with Plunketts in Dublin alongside the Brogan brothers.

Pete McGrath has named nine of team that lost last year's All-Ireland Quarter Final against Dublin. There is only one change from the McKenna Cup defeat to Tyrone with Damien Kelly coming in at wing back for Paddy McGovern.

Posted by Michael McMullan at 21:00
Email ThisBlogThis!Share to TwitterShare to FacebookShare to Pinterest