In The Spotlight - Gráinne Ní Chatháin 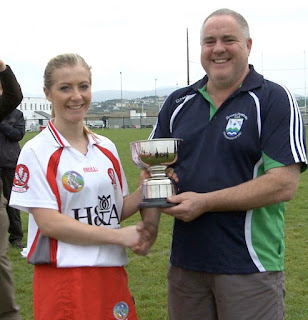 We have another female sports star stepping Into The Spotlight.  Slaughtneil's Gráinne Ní Chatháin


Favourite food: Goujons all day every day with various dips.


Favourite pitch: Swatraghs main pitch or our own top pitch.


Best thing about camogie: The crazy nights out.


Worst thing about camogie: Sunday trainings (am or pm).


Biggest disappointment: Coming away from Ulster Final not having played to our ability.


Biggest influence in your career: Gareth[brother].


Advice for young players: Every player makes mistakes but it’s what you do after making that mistake that counts.


Worst trainer in the club: With Eilís and Louise keeping an eye on everyone, you don’t get away with slacking at training so I can’t think of anyone.


What would you be doing if not playing camogie? Travelling. Same goes for if I was rich.


Other sports played: Nothing at a competitive level but tennis, handball, gaelic, netball, badminton, racquetball have all been tried out and enjoyed.
Posted by Michael McMullan at 20:30
Email ThisBlogThis!Share to TwitterShare to FacebookShare to Pinterest