McGUIGAN HOLDS HIS NERVE IN HEAT OF BATTLE 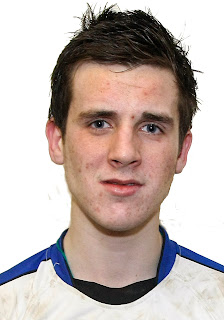 In the middle of the crumpled yoghurt pots and empty plates at ‘the corner table’ in Owenbeg canteen the banter was never far away.
The same characters sat round scoffing their post training snacks as Derry minors went on a memorable championship run.
The laughter was always in full flow and two central to the ‘craic’ were Shane McGuigan and Francis Kearney.  Friends, neighbours, club rivals and as thick as thieves.    Bessbrook will never want to meet them again.
Shane scored 2-4, two of the goals were setup by Francis who scored 1-1 himself and also had a hand in Paddy Quigg’s goal.
Last Wednesday around the half three the Brewster Park scoreboard didn’t make pleasant reading going into stoppage time, Summerhill 3-10 Maghera 1-13, it was time for the deadly duo to work their magic.
In the dying seconds of the game McGuigan was fouled in the process of scoring the equalising goal and McKenna awarded a penalty.  Kearney took the responsibility of the kick and the sides were level.  McGuigan now had a chance to win it.
With the crowd in silence and those following on twitter there was tension.  McGuigan didn’t show it but admits to feeling the pressure.  He had watched Paul Bradley in this situation on countless occasions.  Now it was his turn in the pressure cooker.
He also had delivered a masterclass in Brewster Park last summer for Derry so the venue did hold positive memories.  With 1-7 already notched beside his name you wouldn’t have wanted anyone else standing over the kick.
“I was extremely nervous, because I knew this would win us the match and I didn't want it to go to extra time but I was also confident taking it at the same time.  I stuck to my normal free routine and thankfully it crept over.”

This season has had it’s fair share of peaks and troughs as McGuigan outlines. “We have been in losing positions before. In both MacRory quarter and semi final games we were six points down and came back to win both matches.”

What does it take? “We have a great team spirit and everyone believes in our own ability. We knew if we stuck to our game plan that it would work out and thankfully on the day it did.”

In the aftermath anyone with the energy to still speak struggled to put the game into words never mind the last few seconds.  McGuigan gives us his thoughts on the game.

“It was a very tough game that will stand by us going into the final. Summerhill are an excellent team that were set up well and we knew the challenge that faced us.”

“At times we when we were ahead we probably took the wrong option, but to come back after conceding two goals shows our never say die attitude and that's something we'll bring into the final.”

One of the most special aspects of schools football is the colour and atmosphere surrounding it.  The Maghera ‘16th man’ has been a helping hand and the players definitely recognise this.

“To win an All-Ireland semi-final by a point with a last minute point is special and you have seen the celebrations after the game how much the football means to people in our school.”

“We have a lot to thank to our principal for that as she is organising the buses to the matches and the team are extremely grateful to that.”

Posted by Michael McMullan at 22:27
Email ThisBlogThis!Share to TwitterShare to FacebookShare to Pinterest