McNicholl and the Summer of ‘87 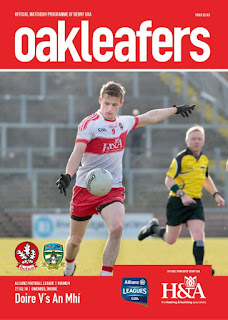 Going to Croke Park back then was a different story.  No toll booths, no Applegreen, no bypasses.  It was a day’s work getting to Dublin but that didn’t matter.  It was my first trip to the mecca of Gaelic Games and I loved every minute.
It was a day trip, and not the straightforward journey we have now; Tobermore, Desertmartin, Cookstown, Dungannon, Moy, Armagh, Newry, Dundalk, Castlebellingham, Dunleer, Drogheda, Julianstown and Balbriggan – what seemed like an endless number of towns and villages took us to the outskirts of Dublin.
Then roundabout after roundabout - a glimpse of low flying aircraft dropping into the airport - and the sight of the ‘Guinness Bridge’ and a car parked up some random side street.
We’d arrived and so had Jim McKeever’s Derry team, one of which was Dermot McNicholl, centre half forward on the team that year.
“It was a funny auld year,” recalls the Glenullin man. “We came through in the Ulster campaign not overly as favourites but we got ourselves together and got to a [All-Ireland] semi-final against a Meath team that went on to win two All-Irelands,” he explains.
After a win over 1986 All-Ireland Finalists Tyrone in the first round, Omagh was the venue for two games with Cavan.  I was at all the games that year but I also remember watching the games back on television and the distinct voice of Frankie Kearney on commentary.
A narrow win over Armagh at Clones on a day that Damian Cassidy was introduced to a certain Vinnie Loughran gave Derry the Anglo Celt Cup. I met quite a few of the Derry players after their win over Armagh and the bandwagon was heading to Croke Park. It was well before the days of selfies, Twitter or Facebook!
At headquarters Plunkett Murphy led Derry out and Dermot McNicholl was sporting a heavily bandaged leg. I remember very little about the actual game I just remembered the devastation afterwards.  It sparked my fanatical interest in GAA.
These were the days before Owenbeg when Derry trained at various club ground across the county.  McNicholl remembers one night in Greenlough vividly:
“I remember going through on goals and Danny Quinn came to bury me with the shoulder. I think he thought of the All-Ireland semi-final ahead and took a step back, so when I stepped forward, I just ripped the hamstring.”
McNicholl still reckons that if it had been a full on shoulder, all would have been fine.  It was just one of those situations and he then faced a two week race against time ahead of the Croker clash.

“Ben Glancy and Sean Moran were absolutely brilliant,” proclaims McNicholl. “You talk now about all the rehabilitation or the recovery sessions.  When I look back then, they had me at Magherafelt twice a day with ultrasound.”
The daily ritual almost paid off, and had he had one more week, the Glenullin man reckons the recovery would have been fully complete.  At the hotel on the day before the game a last run out had told McNicholl he was ready.
“After all the work Sean and Ben had done with me I went to do a wee bit of a warmup and everything seemed grand.  I was getting up to about 80% of a sprint and looked good.”  It put his mind at ease.
However, disaster struck the next day when McNicholl went to sprint into his position:  “I just felt the hamstring just shoot,” he explains. After confiding in Jim McKeever, tactics changed and McNicholl went into full forward against his then International rules team mate, Mick Lyons.
Even on one leg, the Glenullin man gave the legnendary Summerhill full-back a torrid time in the opening minutes.  “I ran into full forward and I was gone. I was goosed. I remember Lyons’ face and I’ll never forget it. I was going past him if he wasn’t even there,” said McNicholl.
It didn’t last long though and Dermot McNicholl’s one legged crusade against the Royals ended when he was called ashore before half time.
“We had a decent side at that stage and Meath were just an up and coming team that were going places. Sean Boylan had them primed.”
McNicholl still has regrets and admits that the 1987 team ‘weren’t that far away’.  Eight of them would feature when Derry lifted Sam six years later but Meath were nearing their peak in an era of their shuddering clashes with Cork.
McNicholl fondly goes through the team as it if was yesterday:
“You look at that Derry team.  God rest him, Paul McCann was left half back.  Centre half back was Joe Irwin who was outstanding.  He was some footballer and we had PJ McCormick at right half back.”
“But that was one of the best Meath teams of all time and they were full of hallions! Liam Harnan was an animal, Mick Lyons was an animal and you had Pauric Lyons and Colm Coyle, who played left half back.”
However, according to McNicholl, his own Derry team were no shrinking violets. “We had good enough hallions to deal with them, if you know what I mean,” he explains.  “Big Plunkett [Murphy] and McGilligan were midfield and were a complete match for Gerry McEntee and Liam Hayes. They had Flynn [Bernie] and Beggy [David].  Those boys were hard to mark. They were blessed with very good forwards.”
It was a Royal attack force which had ended Derry’s dream in ’87. They licked their wounds.  It was time to regroup and restock. Eamonn Coleman later came in as leader.  St Pat’s Maghera won two Hogan Cups, Derry minors won an All-Ireland and so too did Lavey.  Derry were getting used to life on the big stage.  Several players went on to mix it with the best at Sigerson and McNicholl came back from his spell in the AFL.  The jigsaw was complete.
When Down and Donegal showed the way, and with Coleman leading the charge Derry made same long journey south in 1993. There was the same endless line of towns but this time was different.  This time they really believed.
In 1987, Meath had run out comfortable winners but six years later it was a battle right to the end; to the last kick in fact. The rest, as they say, is history.
Derry: Damien McCusker, Hugh Martin McGurk, Danny Quinn, Tony Scullion, Paul John McCormick, Joe Irwin, Paul McCann (RIP), Plunkett Murphy, Brian McGilligan, Enda Gormley, Dermot McNicholl, Damian Barton, Damian Cassidy, Paul Kealey, Seamus Downey.